After his slips on December 9, Eli de Beaufort (9) resumed his run forward, ten days later, by winning the Jean Dumoche (Gr3) Prix against competitors of Feliciano’s caliber or C Bello Roman, only then to be postponed from the previous. Completely barefoot this time around, this Jean-Michel Bazier resident looks great.

We will particularly oppose him discoloration (6), at the top of his condition, as evidenced by his two recent successes.

The Cash du Rib (14) is rarely lined up barefoot and is a great gamble in this group. We’ll then keep him ahead of Delfino (5), in sight during his last two rounds of the same course, and Fric du Chêne (7), Quinté + score on January 9th.

For his big comeback on the Parisian ember, Duel du Gers (12) also deserves a mention with Et Voilà de Muze (3), on ascent, and Elvis de Vallon (15), not being condemned too quickly.

Start with detail and see the positives

Since his victory in June in Toulouse, this Cédric Mégissier resident has been in a bad patch. The only competitor at the start of this Quinté+ game, he’ll likely have a hard time dealing with such opposition. without us.

On December 18th, Sea Foxtrot (1) was not undeserved. His goal will be the Jean-René Goujon Prize, in two weeks’ time. So this race will allow him to maintain his condition. With an iron, you can straighten it.

Quickly erred at Quinté+ on January 9th, this Joël Séché representative had previously only found the very good Evarite du Bourg to block her path to success in Cagnes. Although it has only been postponed from the two races here, it still needs to be monitored.

On January 9, For You Madrik (2) was wrong after a very fast start. It is in perfect condition in the morning. Opposition was raised but it would make its race. He is able to grab a place.

Without questioning the supremacy of Décoloration (6), this resident of Sébastien Guarato assured us of his form on December 15th by taking a good second place at 2,850m off the main track. Once again, we have to reckon with him.

Et Voilà de Muze (3) offered very good value on 15th Dec. We were very pleased with his behaviour. He remained in a similar physical condition. He must fight for the top positions.

Since July, this Milord Drill’s son has been participating in exclusive races in Corsica, with varying fortunes. After a three-month hiatus, here he is dealing with a solid part to resume contact with the competition. Advised the dead end.

We sent Bleu Ciel (4) to Corsica a few months ago. He couldn’t stand the grass, a surface he didn’t feel comfortable with. Since returning home, he has been very toned and in good spirits. In the face of such opposition, he will definitely lack rhythm, but I hope to see him follow. It’s hard to imagine him in the top five.

Off the slopes between November 2020 and last June, this Mathieu Mottier resident quickly found the right fuel. On the horizon during the last two rounds on the track that interests us, promises to be competitive again in the field.

Hot, I was a little disappointed with Delfino’s last 4th place (5). Looking closely, he had a difficult journey. In addition, it is often less severe during the winter. However, its morning look is perfect and has more freshness than most. I know he has the level to be on the podium.

Victorious at the expense of Et Voilà de Muze (3) in mid-December, this resident of Jean-Michel Baudouin brilliantly doubled the bet on Christmas Day on the track that interests us. On her way, she’s still supposed to play a major role in the end.

Color (6) dominated its subject twice. Since then, things have been going well in training. The batch is stronger this time, but it should emphasize its good shape. She will still give her best.

This Claude Guedj representative was never able to express himself in the final stage of Quinté+ on January 9, as he rallied to the position with obvious resources. Judging by his fifth place last December 5th in the GNT Final, here he finds an opportunity to shine.

Since Fric du Chêne (7 years old) has to run hidden, he sometimes gets into some traffic problems. On January 9, he was unable to find the hatch. So I allow myself to run it in seven days. The field is strong, but with a favorable trajectory, it could end with the winning combination of Quinté +.

After taking part in the Tour Européen du Trotteur Français, this Mandarino Blue son had to finish eighth at Quinté+ on January 9th for his return to Vincennes. In this Quinté +, only fans of strangers will be interested in her nomination.

Cicero Noa (8) wasn’t so ironic during his last performance, for a shorter time. However, this performance seems insufficient to hope for a good ranking in such an event. He will definitely find it difficult to compete.

After his demise on December 9, this resident of Jean-Michel Bazier resumed his march forward, ten days later, by winning the Jean Dumoche Prix (Gr3) against competitors of the caliber of Feliciano or Si Bello Roman, when he was only barefoot than the previous one. Completely barefoot this time, looks great.

Elie de Beaufort (9) just won brilliantly in the third set. It is perfect for training. This time, we can raise him four feet. All lights are green to see him play a leading role.

Dauphin of Dogos de Guez in August in the Prix Jean-Luc Lagardère (Gr2), this Laurent-Claude Abrivard resident hasn’t had the same success during her last three attempts in Vincennes. When served with freshness, it should not be condemned too quickly.

Féerie Wood (10) is less severe than last year. You will join the cleat after the meeting. I judge her in better shape than she was during the December 19 run. I hope to see her reclaim her image by taking third or fourth place.

Winner of six races in 2021, including two GNT stages, this son of Quaro has been far less convincing during his last two provincial runs. Finding Eric Raven here in his vain, he is unable to remember our sweet memories.

Fire Craker (11) could not take advantage of a favorable turn last time. Constantly in thickness, it makes sense to head into the final stage. His best performances give him a good shot, but where is he? Keep it or not is a matter of impression.

This inhabitant of Mathieu Abrivard had brightened up last winter in Vincennes and is still making several good attempts in the provinces. As for his big comeback on the Parisian ash, a coup on his part should not be ruled out at all.

Duel du Gers (12) finished well the last time, in Bordeaux, when he had to go a distance. It always looks beautiful in the morning. You will need a favorable course to compete at this level. If so, the place is within reach.

Fifth in the same event last year, this password son is still pretty choppy. However, it still surprised him, as he finished third on November 9 behind Elie de Beaufort in the Medusa (9). to surprise.

Blues d’Ourville (13) benefits from its recent engagements in France. He stayed well into the morning and still had the urge to take the fight. I know he will do his best. However, in the face of such opposition, the sixth place satisfies us.

Dauphin of Duel du Gers (12) At the end of November at the Grand Prix de Salon-de-Provence (Gr3), this resident Jean-Loïc Claude Dersoir did not confirm during his last two tours. After being presented completely barefoot this time around, redemption on his part seemed possible.

In Bordeaux, Cache de Rib (14) could not fully express himself. With a more fortunate course, he would have done better than the seventh. I’m trying something with my four-foot boot, something I rarely do in his career. I think he can get a fourth or fifth place.

Winner of the Green Cup (Gr3) Final on September 6 in Craon, the Haras de l’Epinay representative left us unsatisfied during his last attempts. It works fine here, it is not unable to appear.

Elvis du Vallon (15) discovers interesting racing conditions. After a preparatory session in Bordeaux, with his coach in the grouch, he will present himself in “race mode” on Saturday. It is one of the good opportunities.

Most recently, Lilium Madric’s son was fifth under the Prix Yvonnick Bodin (Gr3) saddle, and he had previously created a surprise by winning the Quinté+ on December 9 at the 2,100m long track. The richest competitor in the lottery, it’s one of our regrets.

The brilliant Madrik (16) has kept a beautiful relic, as evidenced by his recent courses. If the course is favorable to him, he is able to finish third or fourth. 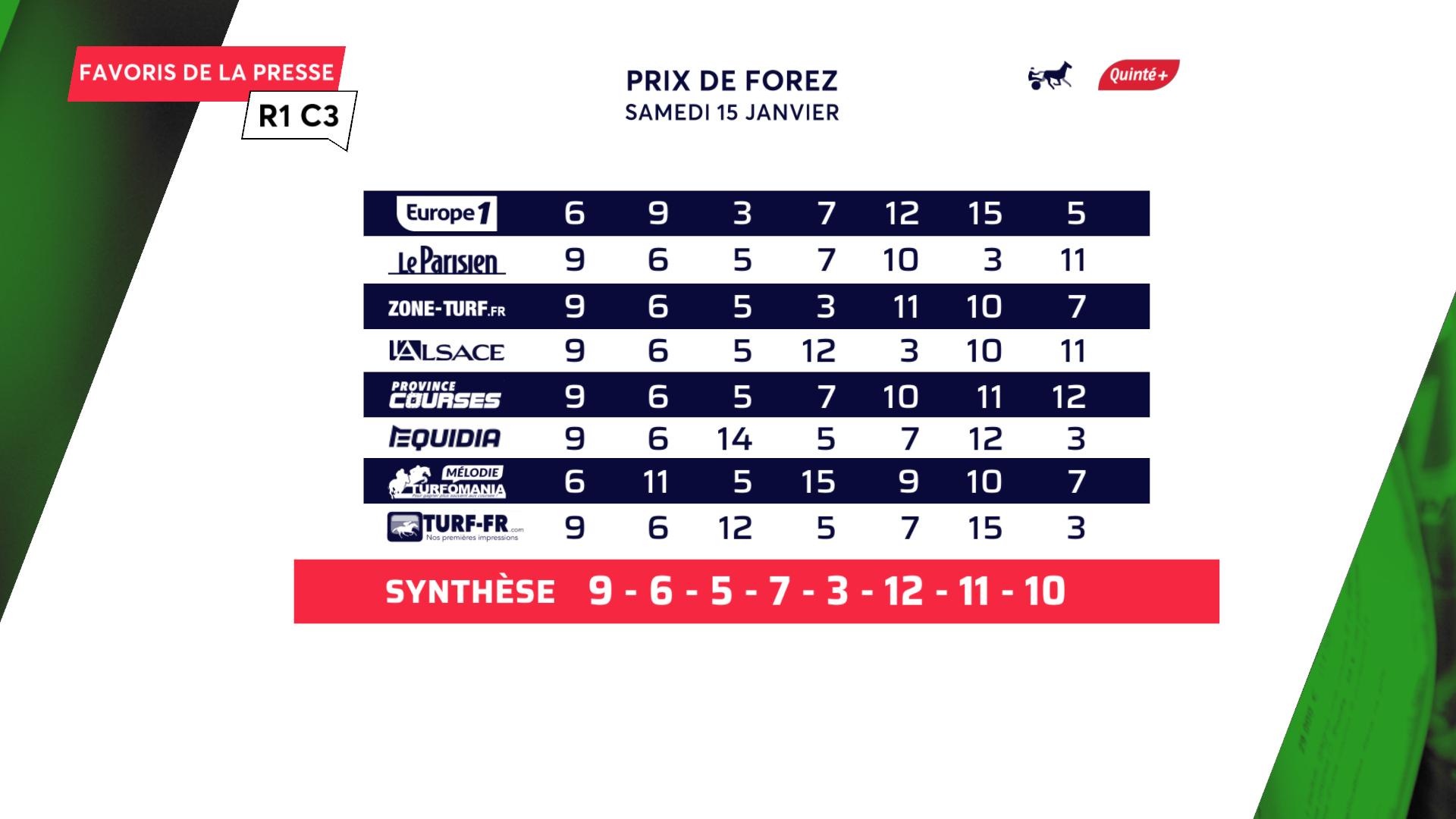